One Fete in the Grave by Vickie Fee 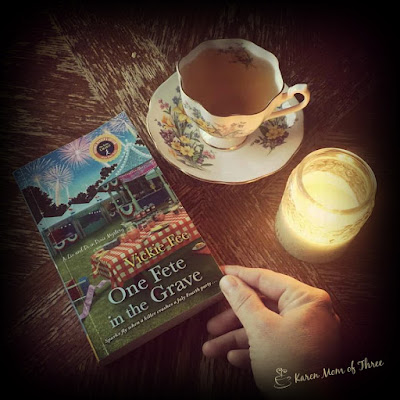 Last week I was more then delighted to find the ARC of One Fete in the Grave by Vickie Fee in my mail box. This is the third book in the Liv and Di in Dixie series and it is very well done. I have liked this series from the start. Enjoying the great friendship of Liv and Di as well as their family, friends and small town life, this is a true cozy mystery lovers series.  In the third book we find that Liv and her husband are still very much living in an ongoing renovation, and still with only one bathroom up and working, it's July, it's hot and there is so much going on.
When a town councilman is found dead and Liv's mother boyfriend is arrested for murder, Liv and Di find themselves in the middle of yet another case.  I like the relationships in this series so much. I like that Di is a postal worker who lives in a trailer, that Liv and her husband are both busy working people. That Liv and her sister fight like sisters do and that life in Dixie is never boring. Vickie has done a great job with One Fete in the Grave and I was so delighted by the ending, I hope you will be too. 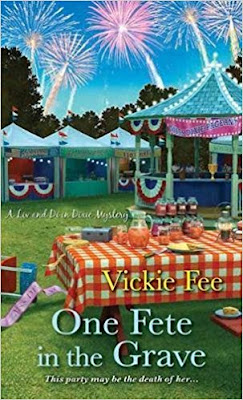 Party planner Liv McKay has outdone herself this time. She’s put together an unforgettable Fourth of July celebration for the town of Dixie, Tennessee—including breathtaking fireworks and an exciting Miss Dixie Beauty Pageant. Maybe a little too exciting.As the party is winding down, Liv’s sense of triumph fizzles when the body of town councilman Bubba Rowland is discovered on the festival grounds. And now the prime suspect in his murder is Liv’s mother’s fiancé, Earl, who had a flare-up recently with Bubba. To clear Earl’s name, Liv and her best friend Di burst into action to smoke out the real killer before another life is extinguished . . . 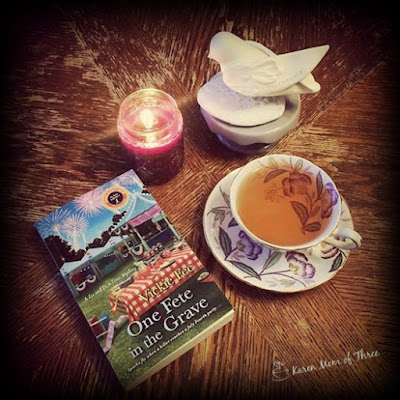 One Fete in the Grave is being released May 30th, you can pre order it now on Amazon by clicking here.

Click here to learn more about the series and about author Vickie Fee
Thank you for joining me for a cup of tea and a cozy mystery review. I would love to hear from you so please leave me a comment here or email me at karenmowen@gmail.com
Posted by Karen M. Owen at 12:00 AM