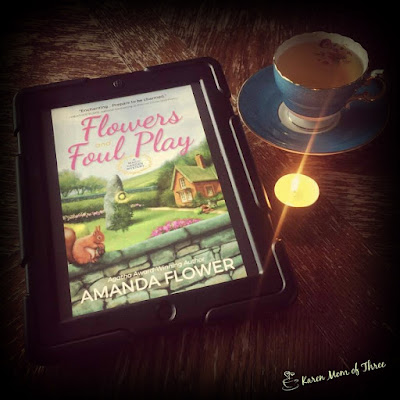 I read Amanda Flower's May release Flowers and Foul Play last week and I loved this new first in series! Set in Scotland and with a magical twist this is story that I found very easy to get into and a main character that was easy to like.
In the book Fiona's life has come to a cross roads and though she is reluctant to slam the door and move on, all signs point to her ever happiness being found in Scotland. Her Godfather has left her a rather muddled mystery and magical garden, ancient grounds keeper and a secret. This book features a small town in Scotland with a tea shop that I feel like I could move right into. Amanda Flowers has a fan in me with this new Magical Garden Mystery and series. 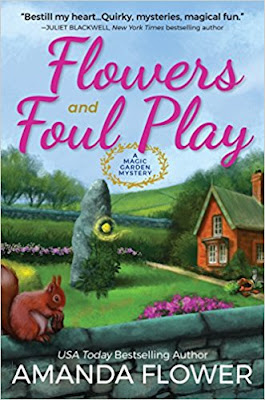 Fiona Knox lost her fiancé and her flower shop―but when she flies to Scotland to inherit her godfather’s cottage and possibly magical walled garden, she may lose her life as well when she’s swept into a murder investigation.Florist Fiona Knox’s life isn’t smelling so sweet these days. Her fiancé left her for their cake decorator. Then, her flower shop wilted after a chain florist opened next door. So when her godfather, Ian MacCallister, leaves her a cottage in Scotland, Fiona jumps on the next plane to Edinburgh. Ian, after all, is the one who taught her to love flowers. But when Ian’s elderly caretaker Hamish MacGregor shows her to the cottage upon her arrival, she finds the once resplendent grounds of Duncreigan in a dreadful shambles―with a dead body in the garden.Minutes into her arrival, Fiona is already being questioned by the handsome Chief Inspector Neil Craig and getting her passport seized. But it’s Craig’s fixation on Uncle Ian’s loyal caretaker, Hamish, as a prime suspect, that really makes her worried. As Fiona strolls the town, she quickly realizes there are a whole bouquet of suspects much more likely to have killed Alastair Croft, the dead lawyer who seems to have had more enemies than friends. Now it’s up to Fiona to clear Hamish’s name before it’s too late in Flowers and Foul Play, USA Today bestselling author Amanda Flower’s spellbinding first Magic Garden mystery.
Flowers and Foul Play is out May 8th from Crooked Lane Books and you can find it on Amazon.com by clicking here.
Thank you for joining me for a cup of tea and a cozy mystery I would love to hear from you so please leave me a comment here or email me at karenmowen@gmail.com
Posted by Karen M. Owen at 12:00 AM