Chilling Mystery, Loyal and Steadfast Sheriff, Last To Remember Is A Truly Great Read. This Post Is In Honor and Remembrance Of The Incredible Writing Team of Joyce and Jim Lavene 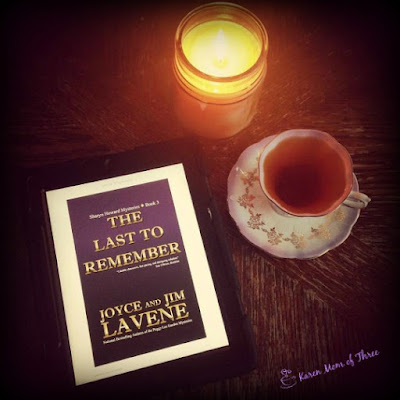 It is with a very heavy heart that I share the very sad news of the passing of Jim Lavene, yesterday May 5th, 2016. I posted this photo of The Last To Remember, blissfully unaware of his passing. I will say that I had the strongest urge to use my purple tea cup for this particular photo, which always reminds me of Joyce, his wife who passed away last October 20th, Jim and Joyce Lavene were so much more then just a husband and wife writing team, they were so much more then authors, they were parents, grandparents and mentors. For their Children Jeni, Chris and Emily I ask that you remember them today in your own special way. The community of writers, readers and cozy lovers have so much to be thankful for in the stories they have given us and the stories they have left behind. 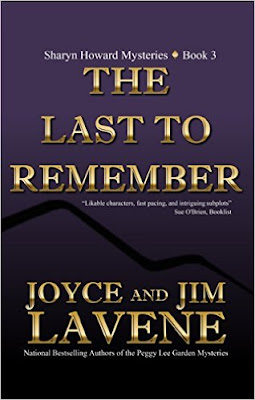 On one of the stormiest, busiest night of the year, a prominent businessman stumbles into the sheriff's office, confessing to a 40-year-old murder. Just a few hours later he's found hanging from the ceiling of the conference room. The district attorney is soon on the warpath and all the clues point to one man. Sheriff Sharyn Howard begins to search for the key to unlock a secret shared by three men for forty years. A district court judge, a prominent businessman, and her own deputy, Ernie Watkins, believe that they were responsible for a child's death at the old Jefferson Training School for Boys when they were just teenagers. But now someone is after all the men, and it's up to Sheriff Howard to unravel 40 years of cover-ups, blackmail, lies, and guilt. But with so many suspects and such little time, can she find the real killer before an innocent man is convicted of murder or before the real killer can stalk and kill his prey? 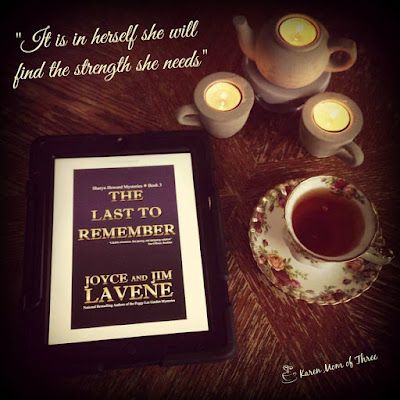 I was sent The Last To Remember by Jim on Tuesday May 3rd. It is always such a pleasure to have any of their stories on my table and I feel honored to have been included in their group as a reviewer. The Lavene Family have given me so much and for the stories, the friendship and the encouragement, I am forever grateful.

The Last To Remember was a very serious cozy, the mystery was chilling, the truth was also hard to read. Sharyn is an amazing character, her way of conducting herself and her loyalty to her department and her town is more then admirable. This story takes you on some twists and turns that I can honestly say I was not ready for. The writing is superb, the mystery and murder heartbreaking and sad. The sleuthing is top notch! I feel very lucky to have been able to read this story and this series.

In my sadness and grief I take comfort in the hope that they are now reunited. I offer my condolences to Joyce and Jim Lavene's family, friends and fans. We are all so much better for knowing them and their work.
Thank  you for joining me for a cup of tea and a cozy mystery I would love to hear from you so please leave me a comment here or email me at karenmowen@gmail.com
Posted by Karen M. Owen at 12:00 AM