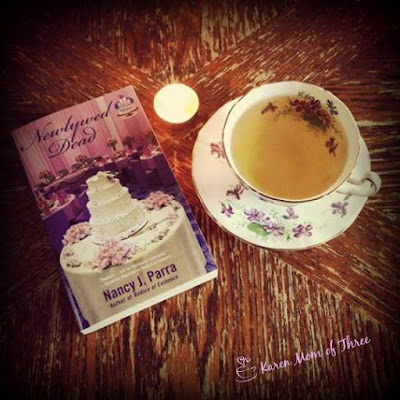 Newlywed Dead by Nancy J. Parra was a great read. I read it in one night and I was pleasantly surprised that even though I had not read the first two books in the series it was not hard to follow the story. The over the top proposals I have seen on youtube make for a really great cozy mystery job idea! Being married as long as I have now I would never have thought there was an entire industry devoted to making the Proposal an event of such scale. It does make for a really fun story line.  The mystery was as intriguing as the job description of main character and proposal event co-ordinator Pepper Pomeroy. This was a fun who-dun-it, and a very good read. 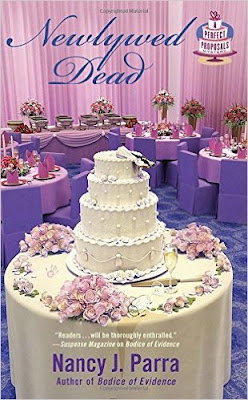 The wedding for Pepper Pomeroy’s sister Felicity starts with dearly beloved but it ends with dearly departed when Ashley, the bartender Pepper befriended earlier in the evening, drops dead from a lethal nightcap. Authorities think it’s just a tragic accident. After all, who’d want to kill a virtual stranger at a country club wedding reception? That’s what Pepper wants to know.
A search into Ashley’s past reveals a twisty path of secret sororities, well-connected enemies, and an unsolved slaying still shadowing members of high society—including a filthy-rich battle-ax whose demands for the services of Pepper’s Perfect Proposals are starting to sound more like veiled threats. Pepper’s business may be booming but continued success means outsmarting a mysterious culprit who’s still wedded to the idea of murder.
Click here to order Newlywed Dead from Amazon
Here to order it with free shipping from The Book Depository
Learn more about Nancy and her series by clicking here.
Thank you for joining me for a cup of tea and a cozy mystery review I would love to hear from you so please leave me a comment here or email me at karenmowen@gmial.com
Posted by Karen M. Owen at 12:00 AM